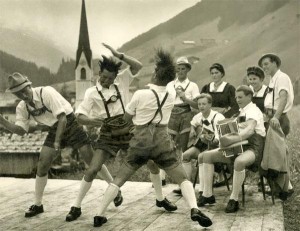 Despair! Like the lilywhite dove flattened in a spring-loaded cage by the plotting Alfred Borden, Spurs fell quarry to some old-fashioned magic this weekend- and they were not alone. With some of the biggest names from the Planet’s Bestest League (and Liverpool) all labouring to overcome significantly modest opponents, you’ll be happy to learn that the F.A Cup is not a complete stiff yet. Huzzah!

Leeds deserved their win. Yes, the pitch might’ve looked as if Time Team had been in residence for the afternoon, but a few divots here and there doesn’t excuse defending like prats. Colin’s United took the chances when they fell and were only a curmudgeonly premature whistle away from scoring a third. Europa League it is, then?

Talking of all things premature (steady) Lewis Holtby was handed over from Schalke this week- and a whole three days before the window closes, too. I was beginning to think Levy was rather pushing his luck with the parsimonious low-balling of the German club. But, as it was pitched by the esteemed Longwell last week:

“Either they take what Levy’s willing to offer in the next week or so, or Holtby comes in the summer and they get nothing and like it.

The question is how much is fourth months’ of Holtby’s services worth to Schalke?”

About £1.5 million it would appear. Anyway, here he is with AVB and the shirt– he’s been given the number 23. And, if you’re into that sort of thing, here’s Alan Hutton being unveiled at Mallorca. How odd.

12 Responses to The Germans Are Coming! | Lewis Holtby Poses With a Tottenham Shirt