Deep Fry Signs But Who’s Next? 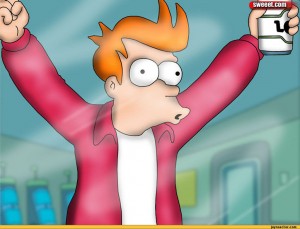 We’re having a few technical issues in the WFRF bunker at the moment and it appears to be a little more complicated than the usual someone’s-spilled-Merlot-on-the-router type scenario that your average work-a-day blogger is confronted with from time to time. Terms such as severely compromised and no, seriously you’ve broken it keep appearing with rather more regularity than I’d hope for.

Still, enough about my problems- we’ll muddle through.

Tottenham Hotspur, now there’s the horse to back. A festive period of immense dimensions. And points, too. Ten of them from twelve, if you want details. Seven wins from the last nine and third spot preserved until at least after the F.A Cup weekend following Harry Redknapp’s improbable triumph over Chelsea at The Bridge on Wednesday. It’s nice to know he still cares, eh? Add to that the return of Scott Parker- with his reliable haircut and unusually exotic red footwear- and we start the year in none too bad a shape. Andre Villas-Bonus.

As the year gets into full swing, then, so does our old demented friend, The January Transfer Window. With only a month to saturate the airwaves with as much gossip, rumour and downright non-truths as possible, the going can often get weird in the condensed Winter market. The hokum comes thick and fast. Sneijder, Villa and Ken Barlow have already been linked with Spurs, all with their own challenges. Wages, age, not being a real person etc..

We have seen some furtive movement in the waters, of course. Zeki Fryers was announced as very much on-board yesterday afternoon. You’d be pardoned for encountering a boding sense of déjà-vu about this one but I can assure you he isn’t Frazier Campbell. Despite the United connections and dubious ‘Z’ in his handle. He can play at left-back and centre-back it says here. Also his full name is an anagram of Refreeze Silky and you can’t say fairer than that.

21 Responses to Deep Fry Signs But Who’s Next?