Win a Free Copy of ‘Vertigo’ by John Crace 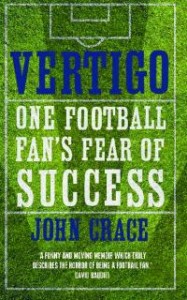 Hello, good morning and welcome. The spectre of derby day looms. Wafting about the dinner table like Banquo’s ghost. And what better way to mark the occasion than with a talk with Spurs fan, Guardian columnist and author of the fantastic Vertigo: One Fan’s Fear of Success. John Crace. And if that wasn’t enough, well, then, you’re just plain greedy.

No, that’s not enough, you say? Oh go on then, we’ll chuck in a free copy of the book at the end…

WFRF: Morning, John. Awfully decent of you to talk with us today. For those poor impoverished souls who haven’t got their mitts on a copy of your excellent book yet- and frankly those people need to have good long think about their recent life choices- what’s it all about and what’s the story behind you writing it?

JC: Apart from getting a year’s tax-deductible football? There were a few main things I wanted to look at. The first was ‘Why do I spend so much time and money on something that causes me so much pain?’ The second was that I wanted to write a book that didn’t treat football as something that happened in its own ‘sports bubble’ which is how so many people write about it. I wanted to treat it as something that was as much part of my life as my family and work and involved the same complex negotiations and heartache. I also wanted to write about what it means to be a fan and how that changes over a lifetime. Above all, though, I wanted to write something funny. There have been other books about fandom but none really managed to capture the sheer black comedy of knowing almost every season is abound to end in disappointment.

WFRF: You speak in the book about a Chelsea supporting friend of yours who’s become somewhat disillusioned with his club turning into a ‘corporate machine bankrolled by a Russian oligarch’, and, as such, rather misses the bad old days of losing at home QPR in front of 25,000 people on a rubbish pitch. How would you feel now if Spurs were to be taken over by some Johnny Cashbucket who pumped all his delicious money into the club and suddenly we’re winning everything? Would you feel we’d done it the ‘wrong’ way or would you just be quietly grateful Spurs were getting their hands on some pots again?

JC: Tricky! I like to think I’m a purist and that I prefer the struggle to the success. That psychologically I’m more comfortable with hoping for great triumphs and being rewarded with many fewer. And I do worry about us losing our identity: hence The Vertigo of the title. The book is also as much about my anxiety about what might be lost if we became Champions League regulars as about what would be gained. I certainly couldn’t stomach the idea of moving to the Olympic stadium… And yet, if push came to shove and we did move, I can’t see myself giving up my season ticket. And if Mr Levy did suddenly open his pockets and Aguero and the like came tumbling out, I rather feel I might get used to it quite quickly. After all, Man United fans seem to have managed the transition quite easily. And my Chelsea mate was very drunk when he said he’s become disillusioned…

WFRF: Much of the story in Vertigo focuses on Spurs’ maiden voyage in the Champions League- most notably your visit to the San Siro for the first leg of the Milan tie. How did it feel to be a part of that? As well your own personal anxieties about making the trip, which you talk about, did you find it somewhat surreal to be watching little old Tottenham going toe-to-toe with the likes of Ibrahimovic and Pato? From the comfort of my second-hand sofa, as well the immense delight of seeing Spurs finally mix it with heavy-weights on the continent, a big part of me was thinking: this doesn’t feel right.

JC: It was a wonderful experience – not just because we exceeded expectations – but because there was the sense it might never be repeated again in my lifetime. I hope I’m wrong, mind you… To go to the San Siro twice and the Bernabeu once in the same season, is something I will never forget. Though oddly, not so much for the games themselves – I’ve been trying to erase the memory of the defeat to Real Madrid for six months now – but for the pleasure of getting there and being there and sharing the experience with other old Spurs mates who like me had waited the best part of 40 years to see the club in action against the best teams in Europe. And yes I did find myself doing a double-take at times especially when we took Inter Milan apart at home. I certainly didn’t have a clue Spurs could play that well and I suspect the team didn’t either.

WFRF: You mention Jimmy Greaves as the player who first attracted you to Tottenham. I’m a bit too soggy behind the ears to remember such things, but just how good was he? Like Jermain Defoe, I’ve watched plenty of videos of him twonking them in from all angles, but was there more to his game than simply being a great finisher?

JC: I was only 14 when Greaves stopped playing for Spurs, so I’d be making it up if I gave you chapter and verse on his technical skills. Given how much he drank and smoked, I’d reckon he might struggle in the Premiership, though. All I know is that to me he was a footballing king. A player whose name appeared on the score sheet every week – the closest I got to White Hart Lane until I was 16 was a newspaper as my parents lived out in the sticks – and whose brylcreemed hair was dead cool. Possibly I might revise that last opinion now…

WFRF:Early days, but how have you enjoyed this season so far? Are you of the opinion that while we made mere ripples in the summer window compared to some, the players brought in have been significant upgrades and there appears to be a nice balance about the team? That chap who used to play for Arsenal certainly looks a bit tasty.

JC: It started in misery. A long trip to Old Trafford to be turned over even without the usual help of the referee. Then a home thrashing to City where we barely got a sniff. And half the team looked unfit and the other half wanted to leave. And it looked much the same for the first 60 minutes against Wolves where the only reason the game was goalless was because the home team was as clueless as us. The up popped Adebayor and all was well. Somehow you just know that if that chance had fallen to Crouchie, he would have tripped over his own feet. After Wolves we were away. Against Liverpool we were sensational and despite dozing off in the second half against Wigan we still got three points. Parker looks a top buy at £5m – we haven’t had someone who hunts down the ball in midfield for ages – Defoe is a lot sharper, Bale’s back on the pace and dear old Ledley has played three games on the bounce. Happy days.

WFRF: Arsenal this Sunday, then. Where will you be watching it and how do you see it going? A lot of people I’ve spoken to feel slightly unnerved by the fact that we’re going in as favourites.

JC: He didn’t look quite so cool when he gifted Wigan a goal on Saturday. But yes, he is still undeniably the coolest player in the Premiership. My mate Bob and I used to take bets with one another about how he would play based on what hairstyle he had chosen for any game. But it’s changed so often we’ve given up trying to guess. And there isn’t a finer one-legged left back in the Premiership.

‘Vertigo: One Fan’s Fear of Success by John Crace is published by Constable & Robinson at £12.99. But you’re much better off buying it from Amazon for £6.99.’ (Not my words)

To win a copy. Just send the correct answer to the following question to: whoframedruelfox@hotmail.co.uk:

Which team played Spurs in the first ever game to be played at White Hart Lane?

Rightio, saucepots. I’m off to the other side of the world for a fortnight. Chocks away and good luck!