A Look Back at Teddy Sheringham’s Prolific Time at Spurs

Teddy Sheringham was a hugely popular and prolific striker for Tottenham, who fully deserved his induction into the Spurs Hall of Fame in 2008.

Let’s take a trip down memory lane and look at his time with the club to see just why he was loved by the fans and lauded by pundits as one of the best strikers in the country.

The departure of Gary Lineker to Japanese side Nagoya Grampus Eight in 1992 left a void in the Tottenham team that needed to be filled.

Sheringham was signed from Nottingham Forest for £2.1 million to fill that void, less than two weeks after he became the first player to score a Premier League goal on live TV. It was surprising Forest let him go, considering he had netted twenty goals in all competitions for them the previous season and helped them finish eighth in the league.

But, their loss was Spurs’ gain and they paid the price for selling him with relegation at the end of the 1992/93 season.

Teddy made his debut for Spurs away at Ipswich Town, just two days after completing his transfer, and netted his first goal for the club three days later in his home debut at White Hart Lane against Sheffield United.

He showed fantastic goal scoring ability from the start of his Spurs career and endeared himself to the fans further when he hit his first hat-trick for the club in a 4-0 league victory over Leeds United in February 1993.

Sheringham went on to score a total of twenty-one league goals, twenty-eight goals in all competitions, as he finished his first season with Spurs as their top scorer.

His goals helped the team finish eighth in the Premier League, which was a vastly improved position on the fifteenth placed finish the season before.

Unfortunately, the following season proved to be a bit of a disappointment for both Sheringham and the club.

Although Teddy netted thirteen league goals, to finish top scorer for the club for a second consecutive season, his appearances were limited to just nineteen due to injury. His absence from over half of all league games played that season hit the team hard and they narrowly avoided relegation, staying up by finishing four points above the drop zone.

The 1994/95 season had started with a cloud hanging over Spurs. They had received a hefty fine and a twelve-point deduction for financial irregularities relating to their former owner.

Despite this setback, the club bought German international Jurgen Klinsmann as a partner for Sheringham and they formed a formidable duo.

Sheringham’s eighteen goals that season may not have been enough for him to make it three seasons in a row as top scorer, but it did take his total Tottenham tally to fifty-two league goals and sixty-seven in all competitions.

The Sheringham/Klinsmann partnership was successful, but ultimately short-lived as the German departed after just one season.

In came Chris Armstrong, a signing many were critical of, and Sheringham had to get used to playing with a different partner again. But, such was the quality of Teddy, it didn’t take long before they were terrorising defences together and they netted thirty-one goals between them as Spurs finished eighth. 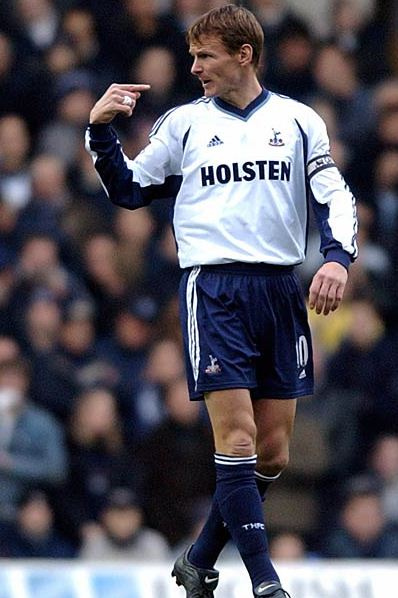 Sheringham’s sixteen league goals and twenty-four in all competitions was enough for him to finish as Spurs’ top scorer for a third time in four seasons.

He was less prolific the following season, although he still headed the top-scorer list at the club with seven league goals.

That would be the last act of Teddy at Tottenham. He departed the club to join Manchester United for £3.5m in June 1997, in a deal which a recent post on the Betway Insider blog suggested would be worth £20m in the transfer market today.

He had played, what many thought, his last ever match for Tottenham, one short of scoring 100 goals in all competitions.

In 2001, at the age of thirty-five, Sheringham returned to Tottenham on a free transfer following the expiration of his Manchester United contract.

He proved age was just a number, by scoring ten league goals in the 2001/02 season to help Spurs finish in their highest league position since 1995/96. He also scored twice in the League Cup as the club made it through to the final.

Sheringham was thirty-six by the end of that season, but finished joint top-scorer in the league with Gus Poyet.

His final season at Spurs was the 2002/03 campaign, where he again finished joint top-scorer in all competitions with thirteen goals. His final ever Tottenham goal came away at West Bromwich Albion in April 2003, nineteen days after his thirty-seventh birthday.

In two spells, Sheringham had scored a total of 125 goals in 277 appearances at a goals-per-game ration of 0.45.

Here are Sheringham’s overall Spurs statistics, taken from Soccerbase.com, showing his total appearances and goals in the league, FA Cup, and League Cup.