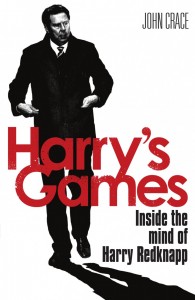 While you shouldn’t rely on Alan Pardew this weekend to at least make life interesting for the subscription-paying neutrals (won’t someone please think of the subscription-paying neutrals!) one thing you can bank on, is when it comes to penning a good book, John Crace won’t let you down. Following his quite excellent Vertigo: One Football Fan’s Fear of Success comes his latest offering Harry’s Game: Inside the Mind of Harry Redknapp.

I’ve got a copy to give away to one of you lucky folk but first, a quick word with the author:

WFRF: Hello, John. It’s fair to say Harold Redknapp is a fairly divisive character. Does this make him an ideal subject for a book? In your own words he’s either the ‘the greatest manager never to have managed England since Brian Clough’ or, a less encouraging ‘bullet dodged’:

JC: Harry is the most absorbing character currently working in British football. Bar none. Fergie was much more successful but he was also much more straightforward. Given a choice of a night out with Harry and a night out with Fergie, you instinctively know with which one you would have more fun. Harry polarises opinion like few others. People either love him or hate him: often without very much good reason. Harry is a man who it’s very easy to misread: a man whom you think you know and understand when you don’t. People have made all sorts of claims for him, both about his managerial style and his character without really thinking about who he is and what he has done. In Harry’s Games I wanted to make sense of him and explain why it was possible for so many people to assume he was going to be the next England manager when there was still a chance he might go to prison. To do this I had to go back over his life and career to get beyond the standard Harryisms in which football pundits traditionally have traded to think about where his loyalties really lie, how greedy he is and how ambitious?

WFRF: As a Tottenham fan I warmed to Redknapp in the first two seasons- obviously all the winning and playing Real Madrid helped- but became exhausted by his knack of deflecting any kind of blame away from himself, whenever things went a bit awry. Instead of the loveable rogue, salt-of-the earth type, he became someone I imagined might point his own grandmother out in a police line-up if it meant he wouldn’t go to jail. Am I fickle? Do all managers do this to some degree?

JC: We’re all fickle. And all managers do this to some degree. But Harry is a past master at deflection. Nothing is ever his fault. He’s either got the wrong players or luck was against him. He’s been like this at every club he’s managed. I think the fans take it so personally and turn against him, because he encourages the view that he’s ‘one of them’ and so they feel the let-down more acutely. But it’s also true that he’s a manager whose strengths and weaknesses are so clearly mirrored in each other. He does have a good eye for a player and his teams often play wonderful football. But he doesn’t have a Plan B for when things aren’t working and neither does he have a Team B. So he seldom rotates the squad and when his favoured players get tired and injured things tend to fall apart because he is forced to bring in players who he doesn’t rate. And, as importantly, players who know they aren’t rated by him. Was it any coincidence that the player who ducked for the injury time freekick that cost QPR all three points against Wigan and effectively condemned the team to relegation was Adel Taarabt, whom Harry had rubbished at Spurs? I think not. The most frustrating part of watching Harry’s teams was that their form often fell apart in the latter half of the season.

WFRF:What’s your view of Harry’s famous blind spot for tactics? I think most people thought this was some kind of ruse, or at least a point overstated. There’re plenty of examples of him successfully re-jigging formations during the course of a game, but do you think he’s been left behind in that regard? His line about ‘bullsh*t baffling brains’ was, if nothing else, an odd comment.

JC: Harry is not big on tactics, but he’s no mug either. The 1-0 away win against AC Milan in the San Siro in the first leg of the Champions League tie was an object lesson in how to play the perfect away European tie. And he did it with a severely weakened team. But on the whole Harry is not quick on his feet to change things. At Spurs, many of his substitutions came at least 10 minutes after everyone in the crowd had seen what needed to be changed. Harry is at his best playing 4-4-2… and for this reason I think he could actually have been a really good choice of manager for the England side. There would have been no getting side-tracked in transfer speculation, he could have played his strongest squad as often as he liked because there’s no need to rotate, his powers of short-term motivation – he’s not good at lifting a team throughout a season – would have come into their own as competitions last five weeks at most and tactics are not nearly so critical to success at international level as they are in top club competitions

WFRF: After all your research and writing the book, has your view of Harry changed dramatically one way or the other. Is there anything about the man that surprised or affected you?

JC: Absolutely. He turned out to be a lot more complex than I expected. Harry has great personal charm and is brilliant at dealing with journalists and fans. By and large he tells people what they want to hear. I came to realise he wasn’t so much an arch-manipulator – though he can be that too – as an insecure people-pleaser. Harry never set out to be a football manager. He just wanted to make a living out of football. Survival, rather than glory, has always been all he has ever really wanted. Enough money and a job that allows him to commute from his home in Sandbanks. Management was something he fell into. Likewise, he is very hard to categorise. Sometimes he has shown exceptional loyalty to people, at other time he has ruthlessly stabbed them in the back. Sometimes he has been incredibly generous, at others a greedy bastard. To make sense of him, I had to go through the details forensically to work out why he could seem so capricious.

WFRF: And finally, are Newcastle going to do us any favours on Sunday? I’m guessing not.

JC:Wouldn’t that be nice… I can’t really see it. Newcastle have effectively been on holiday since last weekend. Pardew admitted as much when he said he wouldn’t mind if Arsenal beat them 4-0. Sunderland will also be demob happy after Wigan got relegated. So I see both Arsenal and Spurs winning relatively comfortably. Which leaves us precisely where we don’t want to be but could have predicted we would be on the first day of the season! Still if the Welsh Boy Wonder stays for another year then AVB will have done a decent job. I don’t Bale would have stayed – or played so well – under Harry.

**Rightio, if you want to win a copy of ‘Harry’s Games’ then follow @wfrfthetruth on Twitter and post #Harry. If you’re not on the old Twitterbox then simply post below the line. I’ll pick a winner at random in the next day or so. Good luck! **