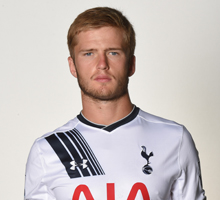 Something I wrote for Yahoo! Sport last week about that man Eric Dier…

One of the consequences of having a team packed with talented youngsters, performing at the height of their powers, is that there’s always someone out there wanting a slice of the action. Maybe they could do the same for us, they wonder, quite reasonably. The dog sniffing around this particular Eric Dier-shaped lamppost is small, family-run club, Bayern Munich. From over in Foreignland.

According to German newspaper, Bild, Dier caught the eye of the Bayern scouts during Spurs’ Europa League last-16 fixture against Borussia Dortmund back in March, and, again, a few weeks later, when England took on the World Champions in Berlin.

After feeding all the necessary data into the Big Football Computer, the Bavarian giants decided that Dier was indeed the one for them. In the long term, he’s being viewed as an indirect replacement for the nicely maturing, Xabi Alonso, whose contract hits zero next year.

Whether Spurs have any desire to sell one of their best players isn’t made altogether clear, or, for that matter, what incoming manager Carlo Ancelotti thinks about the whole pursuit. Is he a fan? Who knows. Like most transfer rumours, though, it’s probably best to approach the report in a Hurt Locker-style blast suit, less the thing blow up in your face in one big unsubstantiated mess.

Eric Dier might be piping hot real estate at the minute, but there’re some folk who think he’s not even playing in his best position. In theory, at least. Here’s club legend Ledley King talking to ESPN:

“I don’t want to be disrespectful but I still think he’ll be a centre-back and that’s nothing to do with his performances in midfield, because he can clearly play there. If he was to move back to centre-back, he would be even better there, especially given his experience in midfield,”

If there was ever an authority on the nuances of fulfilling the two roles, it’s Ledley King. Not just an accomplished centre-half in his time at White Hart Lane, King was also quite adept at pulling on the old anchoring midfield breeches, if the occasion warranted.

If memory serves, he filled in for England against France at Euro 2004, to no little effect. I don’t want to say Zinedine Zidane’s career tailed off slightly after his encounter with Ledley, but if I’m forced into a corner.

Whatever the case, the England international is certainly one to file under ‘keep at all costs’ when drawing up plans for the new season. Any potential ambitions the club might harbour for domestic and European triumphs will hinge on their ability to cling on to players like Eric Dier.

If we can keep him hostage onboard; sell him the vision of a luminous future at Tottenham, it’ll spread the message throughout the rest of the squad. Instead of a stepping-stone to greater things: it’ll be seen as a club that’s going somewhere on its own steam. Forget Bayern Munich, with their billions of Euros, eye-wateringly huge stadium, never-ending honours list, multi-Champions League winning manager and world class players…

…not quite sure what my point was, actually.

3 Responses to Dier in Demand