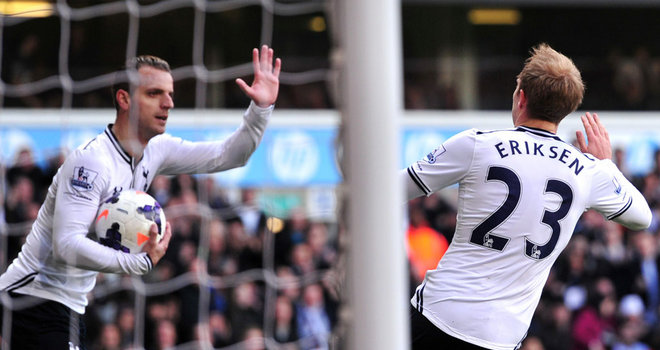 Put the man on the assembly line of a Japanese fish market, because Tim Sherwood is a fan of guts. It’s what inspired Spurs’ second half turnaround against Southampton at the weekend and it’s exactly what St. Albans’ finest will be hoping will propel his boys to an unlikely end of the season triumph. Never before has a team qualified for the Champions League by intestinal power alone, but where would we be as Tottenham fans without whimsical, misguided optimism? Nowhere, that’s where.

Hmm, you know what, Arsenal are starting to drop poin-

Away from Sherwood doing the tea-cup-throwing maniac bit at half-time the game did unearth one or two positives ahead of next week’s death march to Anfield. Christian Eriksen’s hairline might be retreating quicker than Napoleon’s troops from Moscow but egads the boy is a talent. He also appears to have developed some form of synergy with Roberto Soldado, who himself was lively and graceful in possession. His showreel of helium-light first-time layoffs was impressive enough. As well, the brio with which he gunned down Dejan Lovren for the second goal should make compost of the idea that the Spaniard is lacking the desire to change his fortunes. Although his critics might be looking for more of a headline than Man Runs After Football.

Meanwhile our defence looks in total disarray at the moment- and it’s more than a little alarming for those involved with online football betting that we’re scheduled for a meeting with perhaps Europe’s most in-form and dynamic strike partnership. In a precariously high line and on current form, Danny Rose and Kyle Naughton are the defensive equivalent of Jenga; good fun n’all but guaranteed to fall apart with the slightest encouragement. Wooden blocks for brains. Young Naughton, despite Sherwood rightly drawing attention to his second-half recovery at the weekend, is an enduring concern. He could feasibly be working at a garden centre by Monday, if the maltreatment by Suarez and Sturridge is too severe. But that’s for another time.