Tottenham travel to the atmosphere vacuum that is the Olympic Stadium on Friday night to face Slaven Bilic’s West Ham. Having played a handful of games at Wembley this season, itself a whopping great cauldron of anti-fun, we should feel right at home.

Here’re three great goals this fixture has thrown up over the last decade. 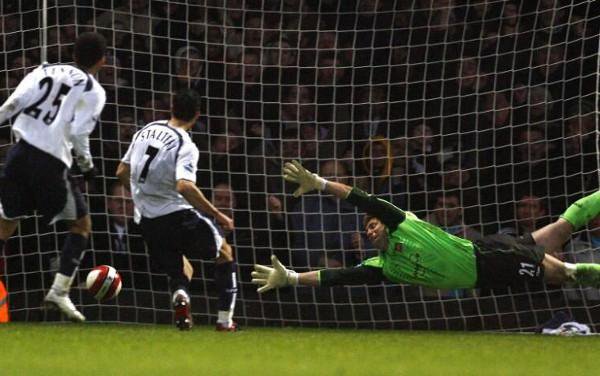 The Boleyn Ground, 2007 — The Canadian utility man’s effort won’t be remembered for its wealth of quality. Rather its expert level trolling. In a tumultuous, chaotic London derby at Upton Park (gawd rest ‘er soul) where the score bounced from 2-0 to the Hammers to 2-2 then 3-2 back to then hosts, before a delightfully curled Dimitar Berbatov free-kick pulled Spurs back on level terms again in the 89th minute. Then, in injury time, on a last hurrah counter-attack, the ball eventually squeezed its way into Stalteri’s path for a simple tap-in. Gut-wrenching stuff for West Ham. Pandemonium in the away end.

White Hart Lane, 2013 — The first hint that Tottenham’s post-Gareth Bale spending binge wasn’t quite the rip-roaring success it had been made out to be. We’d sold Elvis and bought the Beatles, apparently. Big money signing Paulinho and Roberto Soldado both featured for Spurs in this early-October encounter, but it was the fitfully talented Ravel Morrison who stole the show with a heart-thumping individual goal. The third in a surprise 3-0 win for West Ham.

With Spurs already wobbling, Morrison slalomed past Jan Vertonghen and Michael Dawson before chipping Hugo Lloris. Shades of a young Michael Owen. I love it when a plan comes together, purred Sam Allardyce, before going on to win one out of the next 13 games.

The Boleyn Ground, 2013 — A stunning long-range strike from a player still in the early stages of his ascent to superstardom. Like winning on the Greek slots, what made this goal great, as well its ferocious passage into the top corner, or Tommy Carroll’s two-yard assist, was Bale’s celebration with Andre Villas-Boas. Under severe media scrutiny at the time, for having the audacity to carry a notebook and talk thoughtfully about the game, the Portuguese coach would’ve been as delighted as anyone to see the Welshman’s late winner. Bale showed his public support for to AVB by leaping wholeheartedly into his arms. Lovely.